This application note describes techniques for interfacing parallel I/O and serial I/O 8-bit A/D converters to the INS8070 series of microprocessors. A detailed hardware and software interface example is provided for each type of A/D.

The INS8070 series of microprocessors is designed for compact, low cost control, data acquisition, and processing applications. Up to 2.5k-bytes of ROM and 64 bytes of RAM are available on-chip. The INS8073 is a programmed version of the INS8072 with a Tiny Basic microinterpreter onchip. The microinterpreter executes source code directly, thus avoiding the need to translate the source code into machine language. This approach allows users to develop system software without using a development system and gives a greater flexibility for design changes. 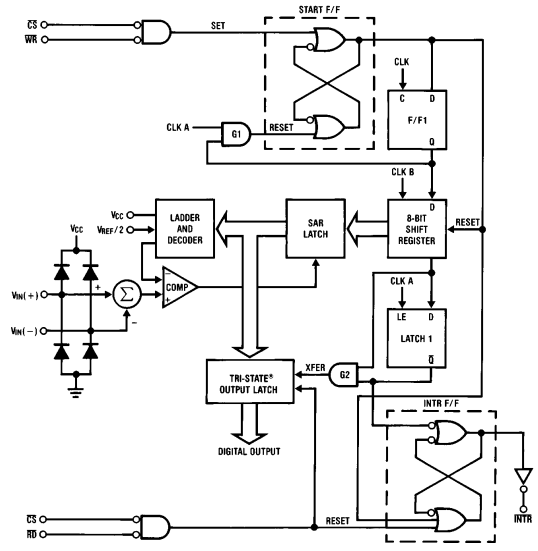 The ADC0801 series, the ADC0808 series, and the ADC0816 series are CMOS 8-bit successive approximation A/D converters that include TRI-STATEÉ latched outputs and control logic for parallel I/O. These A/Ds can be mapped into memory space or they can be controlled as I/O devices. The ADC0801 series includes a differential input and span adjust pin, while the ADC0808 and ADC0816 series include an 8- or 16-channel multiplexer with latched control logic.

The ADC0831 series, on the other hand, are CMOS 8-bit successive approximation A/D converters with serial I/O. In addition to the single analog input ADC0831 in an 8-pin miniDIP, they offer 8, 4, or 2-channel analog multiplexed inputs. Serial output data can be selected as either MSB or LSB first. The channel assignment of the multiplexers is accomplished with a 4-bit serial input word preceded by a leading ``1'' start bit.

The ADC0801, ADC0802, ADC0803, ADC0804 parallel I/O A/Ds and the ADC0833 serial I/O A/D are designed to work with a 2.5V fixed reference for a 0V to 5V analog input range. The full 8 bits of resolution can be encoded over any smaller analog voltage range by applying one half of the desired full-scale analog input voltage value to the VREF/2 pin.

The ADC0805, ADC0808, ADC0809, ADC0816, ADC0817 parallel I/O A/D converters and the ADC0831, ADC0832, ADC0834, and ADC0838 serial I/O A/D converters are designed to operate ratiometrically with the system transducers. A ratiometric transducer is a conversion device whose output is proportional tosomearbitrary full-scale value. Theactual value of the transducer's output is not important, but the ratio of this output to the full-scale reference is important. Also, these parts are designed to use a 5V fixed reference.

12-Bit Sampling A/D Converter Conserves Power
This application note uses a timer IC (ICL7555), CMOS logic and discrete transistors to automatically control the conversion the MAX190 12-bit SAR analog-to-digital converter (ADC). The delay between conversions can be programed using a resistor. Logic ci
555 Timer as an A/D converter
I had a Basic Stamp project that needed to measure a nominal 12 volt battery, and I wanted a simple solution. This is the simplest I could come up with.
16-bit ADC provides 19-bit resolution
Many data-acquisition systems require both high accuracy and a fast acquisition rate. These attributes allow the system to detect small data signals and to group more sensor channels into the same system.