This circuit used to come as a kit from a surplus supplier, but probably isn't available anymore. It shows a few novel concepts such as using a 555 as a pulse width modulator (PWM), and series/parallel camera flash transformers.
WARNING: This circuit is contains voltages and currents which can KILL if you are not careful. Charged capacitors will SURPRISE YOU! They can hold a lethal charge for hours! If you don't know much about working with high voltages or if you aren't crazy (like me) then DO NOT attempt to construct this circuit. I CANNOT BE RESPONSIBLE if you electrocute yourself to death! That said, let's have some fun! 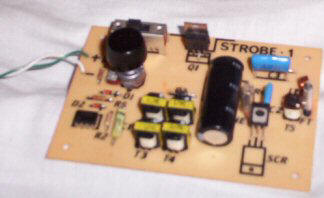 The 555 is set up as a pulse width modulator (the off (low) time being set by the trimmer). The output at pin 3 is connected to the gate of the P-channel MOSFET (IRF9Z20) through the 100R resistor to prevent parasitic oscillation of the transistor. A low signal at pin 3 causes the MOSFET to turn on, thus the potentiometer controls the output power, and somewhat the flash frequency, by varying the duty cycle of the 555 and in turn the MOSFET.

The drain of the MOSFET transistor is connected to the primaries of T1-T4 - the camera flash transformers. These primary windings are connected in series, and being originally intended to operate at 3V, this allows an input voltage of 12V. In this particular series/parallel configuration, the secondaries of T1-T4 are connected in parallel, supplying approximately their rated 330V, but at 4 times the current since there are 4 of them. This is rectified by the 1N4005 diode and passed along to the 150u storage capacitor. Also, the 6n9 and 12n capacitors are charged. Once the 6n8 cap reaches the strike voltage of the neon lamp, which is approximately 60V, it is dumped into the gate of the SCR, turning it on. This in turn dumps the 12n capacitor into the primary of the trigger transformer, T5. This is stepped up to around 3kV and applied to the glass envelope of the Xenon flash tube. Through the capacitance of the glass, this voltage is passed through to the Xenon gas inside, ionizing it and creating a conductive channel for the discharge of the 150u capacitor. The 2u8 inductor widens out this discharge, creating a slightly longer flash.

This circuit demonstrates how the 555 can be used as a PWM. You can see in the schematic how the two diodes are connected between pins 2/6 and pin 7. The 3k potentiometer connected as shown sets the on time of the 555 (Off time of the MOSFET), but if another potentiometer is connected between pin 7 and the other diode, the off time can also be adjusted. The way the circuit is drawn in the schematic above, the off time is basically fixed. The MOSFET is on during the off time of the 555 because when it's off, pin 3 is connected to ground, so another way of saying it is that it goes low. Then when the 555 goes high again, or back to positive rail voltage, the internal capacitance of the MOSFET is shorted out which shuts it off. Everyone seems to assume people know this. It's different from regular bipolar junction transistors because in a bipolar, if you disconnect base current, it conveniently just shuts off as long as there is no current flowing. Now, because of the way a FET works, there is a sort of capacitor formed between the gate and channel. Just removing the voltage source does not shut the FET down. This is because of the capacitor, the electric field is still present and it just keeps going. So if your gate input doesn't discharge this capacitor, you will need to use what is called a or pull up (P-channel) or pull down (N-channel) resistor beteween the gate and source. In this case though, we don't need it because the 555 automatically pulls itself up and down for us. Gotta love that 555!

T1-T4 are 4 identical Kodak Ektralite camera flash transformers. The brand name isn't important, just that they're itentical. They have ferrite cores like most camera flash transformers. I took one apart and it has a 17.5 turn primary and around 720 turns of 41AWG on the secondary. If you like torture then I suppose you could try winding your own, but 41AWG is as fine as hair and is difficult to work with. When you're all done, dip it down into some wax very slowly to hold things together and to insulate it. Using transformers that are not identical is ill-advised since differences will cause one of them to pass more current than the others. This is always the case when you use things in series. If you've ever played with those light strings they sell at christmas time, if you put a bulb from a shorter one into a longer one, it will glow more dimly than the others. That's because it has lower resistance and thus a lower voltage drop, so it causes all the other ones to glow more brightly. If you do the opposite and put a bulb from a longer one into a shorter one, you will get a bright flash and it will burn out instantly. Get the idea?

T5 can be substituted for your typical 3kV Xenon trigger transformer. Since FT is your typical compact camera flash tube, there is no trigger terminal. The output of T5 simply rests against the glass envelope.

To make the 3k potentiometer, a standard size is used, a 10k, and a 4k7 resistor is placed across it. This is an interesting way to get a custom sized pot.

The instructions for building the circuit along with the original schematic I unfortunately have lost, but I do remember that you could run it on 6 volts by removing 2 of the transformers and putting jumpers in place of the primaries. Probably a better idea would be to wire the primaries of both pairs in series and then the series pairs in parallel so that your could keep the same power output. Then just leave the secondaries connected the same as in the schematic. If you get 1.5V transformers (from camera flashes that take 1 battery) and used them instead, then you could get 1.5, 3, and 6 volt operation.

Charging the 6n9 through a 39M resistor allows a longer timing cycle at lower current than if a larger capacitor is used. This is possible until you start getting near the leakage of the capacitor. This is why a polyester is used. A ceramic would probably work as well.

The value of the 2u8 inductor is approximated based on size and the number of turns. I cannot afford an LCR meter to measure this properly. If anyone would be willing to donate one to my cause, I would appreciate it very much.

Photo Electric Street Light
Photo Electric Street Light which receives input from a cadmium sulfide photo cell and controls a relay that can be used to switch off and on a street lamp at dawn and dusk.
LED Traffic Lights
The LED traffic Light circuit controls 6 LEDs (red, yellow and green) for both north/south directions and east/west directions.
14 Watt Compact Fluorescent Electronic Ballast
This circuit came from a 14 Watt Commercial Electric spiral bulb from Home Depot. In fact, I drew it in that way because it was layed out very well, so much credit should go to Sam Goldwasser.