This is a high energy ignition coil driver circuit capable of running from AA batteries.

WARNING: This circuit contains voltages and currents which can KILL if you are not careful. Charged capacitors will SURPRISE YOU! They can hold a lethal charge for hours! If you don't know much about working with line (and higher) voltages or if you aren't crazy (like me) then DO NOT attempt to construct this circuit. I CANNOT BE RESPONSIBLE if you electrocute yourself to death! That said, let's have some fun!

A camera flash or other suitable charging circuit charges a 4uF capacitor to 380V. When the Fire switch is pressed, a small current flows through the gate of the SCR to turn it on, by way of a 1k current limiting resistor and a small capacitor for debounceing purposes. Once the small capacitor becomes fully charged, sufficient current flow to the gate stops, thus preventing the SCR from remaining in the on state if the switch is held down. A 10MEG resistor is connected across the capacitor to discharge it once the switch is released. This prepares it for the next firing.

While the SCR is turned on, it connects the main capacitor to the primary of the Ignition coil. The voltage across the primary rises to 380V, thus storing the energy from the capacitor as a strong magnetic field. Once the capacitor is discharged, the voltage falls back to zero and this magnetic field begins collapseing. During this collapse, a reverse polarity to the initial charging current is formed, known as a flyback. This pulse is returned to the capacitor and charges it back up via a 400V Fast diode connected backwards across the SCR. This flyback pulse is expected to be around 700V. While the SCR is in the on state, this process continues until the energy is taken from the secondary in the form of an arc (commonly referred to as the spark).

The pulsed nature of the charging circuit assures that there is always time when no electricity is flowing, thus allowing the SCR to switch off. 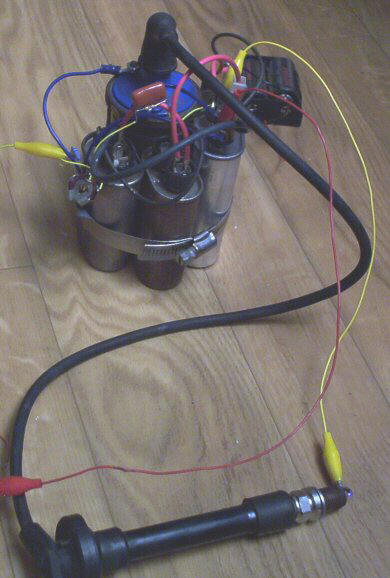 This circuit comes into its own when used in vapor and gas deflagration cannons (potato guns, for example). The hot spark will ignite troublesome mixtures that a piezoelectric grill igniter won't budge. It can also be used to replace a grill ignition system, and many others. There are many applications, including just looking at the long bright arc and listening to the sharp POP. Most of you probably already know what you're going to do with it.

4uF is a good value for the main capacitor. Any more or any less brings the circuit farther out of resonance. It's a good idea to use nonpolars since there are polarity reversals and pulse discharges. I use 4 microwave oven capacitors. They are usually around 1uF apiece. Just connect them in parallel. There are plenty of wires with spade lugs on both ends in microwaves, so save them to connect the capacitors. Then the whole assembly can be brought together with a large hose clamp or 2 smaller ones screwed into one another. If you're talented, you can use point to point wiring and get the coil, SCR, and everything to be held together with the hose clamps in one mass. A carrying arrangement can even be devised using a plastic bucket.

For the ignition coil, ones from cars are usually the largest and the best to use. If you're going the salvage route, make sure you pick up a few to insure that you get at least one that isn't burnt out. High school and college auto shops and scrapyards are good places to find them. The primary terminals on the cylindrical coils are labeled BAT and DEC, short for battery and distributor earth connection. Newer coils have unlabeled primary terminals. Since determining the internal wiring of the ignition coil is difficult, don't worry about it. The few hundred extra volts isn't really noticeable. One possibility though is, since most of the GM coils use the same connector, if you can find one that's in a car, find which terminal connects to the battery and note which battery terminal it connects to. If it connects to the positive battery post, then the other terminal is the common primary/secondary connection. If it connects to the negative or chassis ground, then it is that terminal.

To give you an idea of the origins of this circuit, a description of the automobile circuit follows. In a traditional automobile [low energy] ignition system and most cylindrical coils, the BAT terminal connects to the +12V supply and the DEC terminal connects to a special rotary switch inside the distributor that is driven by the cam shaft. This switch connects the coil to the chassis ground when a spark is needed. The high voltage terminal is connected to the upper part of the distributor that is turning and directing the pulses to the right spark plug at the right time. In a high energy ignition system, there is a capacitor that is discharged into the primary electronically, just as in the ignition coil driver circuit above. This eliminates the high currents on the rotary switch or even eliminates the switch altogether by using another type of cam shaft position sensor. The HV rotary switch is retained, however, or in some cases, the distributor is eliminated completely by either firing all spark plugs simultaneously or by using several separate ignition coils.

If you notice, the primary and secondary are wired in series with respect to the HV output terminals. This is to get an extra few hundred volts into the spark (thanks Jochen). Also, the primary is connected in reverse polarity to the way it would be in a car. This has no effect on output, however. It was only to facilitate a direct connection of the ground to the rest of the circuit without having to go through the diode/SCR. It could be run the other way too, but I like the elegance of it.

For the charging circuit, as pictured above, a camera flash circuit is preferred since it allows you to move the circuit around and use it in places where an outlet is not available. These can be found in disposable cameras or broken ones. All that needs to be done is to remove the xenon tube and storage capacitor after determining the polarity. The ignition coil driver circuit is then connected in place of the storage capacitor.

If the circuit is gong to be used near an outlet and not moved very often, then a rectifier diode and 100 ohm current limiting resistor can be used instead. A bridge rectifier may also be used if a pulse rate of over 60 times a second is needed, up to 120 times a second.

In case you're wondering, the 400V Fast diode makes a very big difference in the arc produced. It makes the arc almost twice as hot and twice as loud. It also saves the SCR from potential failure so don't leave it out!

You can experiment with different sizes of the 3n3 cap and 10M resistor. Those were just parts I had lying around and they work. If the resistor is too small, the SCR will fire when the button is pressed and released. The sweet spot is somewhere between 1 and 10 MEG. You may want to try different values for the capacitor to vary the on time of the SCR for more or less oscillations. The SCR won't fire if the gate resistor is greater than 1k.

Another thing which gives you greater flexibility is, instead of soldering the switch into the circuit, put a headphone jack in its place. Then you can have a switch that plugs right in, or you can have it on a long cord so you can stand back from whatever it is you're sparking at.

Optional:
400V rectifier, 100R 5 watt resistor, and a 240V transformer or other such AC power source